I have two children at home – 7 and 9 years old.  Over the last few years, spurned on by my daughter’s obsession with the incredible book “Welcome to your period” by Yumi Stynes and Dr Melissa Kang, I embarked on a mission to be as open with them as possible about my body, their bodies and in answering their questions about how babies are made and things of that nature  (my review of “Welcome to your period” is here: Book Review * Feminista Journal).

Over the past couple of months the questions from my kids about sex became more frequent and (sometimes) more challenging to answer.  As a result, when their school sent out a link to a Zoom seminar for parents on teaching kids about sex and sexuality, I jumped at the chance.

The Zoom seminar was called “Talking the Talk – Sex and Health Education”.  The presenter was Vanessa Hamilton, a sexual health nurse who also has 16 years of experience as a sexual health educator:  talkingthetalksexed.com.au.  I have to say, going in, I wasn’t sure I would learn very much.  But Vanessa’s presentation was amazing – a real eye-opener.  I found myself taking lots of notes, and since I participated in the seminar I have made a few key changes to the way I have approached these issues with my kids.

One of the things that struck me was Vanessa’s observation that just because your kids aren’t asking questions doesn’t mean they aren’t thinking about these things (or, in my case, just because they are asking about certain things doesn’t mean they aren’t curious about other things).  Related to that point, Vanessa asked the parents on the Zoom to think about how they first learned about sex.  Many of us had not been told much at all by their own parents.  We had been handed books without much discussion, or found information on our own, or been told about sex by friends at school.

That sparked Vanessa’s next question: how do you want your kids to learn about sex and sexuality?  From friends at school, from the internet – or from you?

Overwhelmingly, parents on the Zoom wanted to be the ones having these important foundational discussions with their children, for many reasons but including the fact it encourages open dialogue and removes the notion that these topics might be secret or shameful and not suitable for a discussion at home.  Vanessa made the further point, that to delay these conversations because of the idea that kids “aren’t ready yet” or “just aren’t that interested” risks losing the opportunity to be the person your child feels comfortable learning from and talking to about these topics.

What have I done differently since Vanessa’s seminar?

First, I ordered a bunch of books for the kids about all kinds of things – changing bodies/puberty, sex and sexuality, consent, and gender identity.  The kids sat with me while I browsed online and we chose books together. The range of books available is incredible and I was pleasantly surprised at how involved the kids were in this process.  When the books arrived, the kids quickly worked out which ones were interesting to them and have spent a lot of time reading them since – sometimes with me, sometimes on their own.  That alone has been great because the reading has sparked a lot of questions – including questions I didn’t think the kids would ever ask – giving me a lot of opportunities for open discussion.

One of our favourites is “Sex is a Funny Word” (Cory Silverberg and Fiona Smyth) (Sex is a Funny Word — Cory Silverberg).  Aimed at kids of 8-10 years and written in a comic book-style, it covers bodies, gender and sexuality in a way that is engaging and inclusive.  Our family is not a traditional one and I really appreciate the way Cory’s book encompasses all kinds of families and all kinds of kids.  The authors also have a book for younger children (preschool to age 8) – “What Makes a Baby”.  My kids loved this book when they were small and I found it one of the few books (at that time) that didn’t assume that all babies were born to heterosexual couples.  The book treated different ways of conceiving and giving birth with sensitivity and nuance, allowing parents a springboard to have discussions with children in a way that suits their own family arrangements.  Miriam Kaufman, Cory Silverberg and Fran Odette have also authored “The Ultimate Guide to Sex and Disability”, suitable for all ages.

Another favourite book of the bunch is “Wait, What?” (described as a “comic book guide to relationships, bodies and growing up”).  This graphic novel by Heather Corinna and Isabella Ratman tells the story of four friends who are curious about growing up, with lots of discussion about the crazy/weird stuff that happens as you hit puberty.  It is modern and promotes diversity.  Some of the reviews describe it as a book for “tweens and teens” and I think that is right, but I have to say this book is the one my 7 year old is most likely to pick up on his own to read.

Not all of the books we bought have been great.  The thing that has been most disappointing about a few of them is the lack of openness about the clitoris and vulva.  It is amazing to me, in 2021, that some of these books practically ignore the clitoris and pretend that vulvas don’t come in all kinds of shapes and sizes.  One example is “The Girls’ Guide to Growing Up” by Anita Naik.  The book is described as explaining, among other things, the changes that happen to girls’ bodies during puberty – and yet the “your puberty timeline” entirely ignores the changes that happen to the vulva.  A section described as “down there” (!) has one line stating that the labia “gets larger during puberty as the rest of your body grows” – and the clitoris is described only as a “small pea-shaped lump at the top of your labia [that is] very sensitive to touch”.  It is hard to imagine a less inspiring description of the clitoris, let alone the fact it ignores what science has recently discovered about this incredible organ.

In a world where there is growing awareness of the number of teenagers and women who seek surgery to “correct” what they feel is an “abnormal” vulva, the omission in a book like “The Girls’ Guide” of any discussion about the differences between vulvas is (in my opinion) unforgiveable.

In contrast, “Wait, What?” and “Sex is a Funny Word” contain lots of drawings that make very clear the incredible array of vulvas (and penises and everything in between) that make up our diverse world of (real) body parts.

In addition to ordering a pile of books, the next change I have made following Vanessa’s “Talking the Talk” session is to take her advice and look for “teaching moments” that give me the opportunity to open up a discussion with my kids about sex/sexuality/relationships and engage with them about questions they have.  Now that Vanessa has opened my eyes to the importance of this, it seems learning opportunities are popping up everywhere.  A news article about the four tips of an echidna’s penis (I’m not making this up).  A story the kids noticed online about the “no sex Olympics” (what a teaching moment that was!).  A discussion the kids overheard between adults about a man accused of sexual harassment – instead of telling the kids it was nothing for them to worry about, I dived right in and we had a very interesting discussion about it, which transformed into a discussion about consent (a topic that is everywhere right now).

I’m sure at least some of you reading this are thinking, “um, but isn’t a 7 year old too young to be having these discussions?”  Not so long ago I would have agreed with you.  But the responses I have had from my kids and the questions they have asked have shown me that they are already thinking about these things, are very much wanting to have a discussion about them, and (in some cases) have some very odd ideas about how things work in the “adult world” – leaving me very glad to have the opportunity to set them straight on a few of those ideas.

A few other observations.  Vanessa’s seminar also made me realise that speaking to kids “about sex” or “about puberty” is an overly narrow way of approaching these issues.  Sex and puberty are important topics, sure.  But there is also sexuality, gender, relationships, biology, intimacy and a range of other things to discuss.  There is even a Gender Unicorn to talk about! Gender Unicorn – TSER (transstudent.org)

On that note, I’ve noticed my kids want to know about how intimate relationships work as much as they want to know about the physical act of intercourse.  My role is not just to make sure they understand the importance of contraception and safe sex practices well before the time they start having sex, but also to make sure they have an understanding of human relationships, including intimate human relationships – both physical and emotional – as well as develop a positive sense of self/identity, including sexual identity and expression.  I want them to know that sex can be fun and enjoyable.  I want my daughter to treat her sexual enjoyment as important – not secondary to that of a male partner, if indeed she chooses male sexual partners.  Put another way, the conversation to be had is a lot wider and deeper than I had been imagining it. 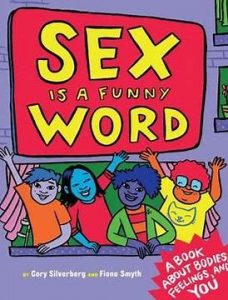