This is the final instalment of our three-part conversation with Ashley Remer, founder of Girl Museum (the world's only museum dedicated to celebrating girlhood)

(FJ) Something that’s going on in my mind based on what you have been talking about, is if childhood is this particular period that is distinct in its possibilities (i.e. for selfhood and identity), then this is also a period where girls are socialised to be women, or to be girls in particular ways. That to me, is part of this theme of vulnerability and agency in our conversation. But there’s a huge overlay of socialisation going on here too. I wonder if socialisation is part of the narrative, or the picture, that needs to be brought out or recovered in speaking about the girl experience?

(A) I think there’s multiple levels there. Because there’s the girl on the ground, in real life, and for us, how do we make this recovery happen in practice? How do we encourage girls to write to their experiences? It’s sort of like, if you look at now from the future, as an archaeologist or as a historian. I still don’t think they would care what girls wrote, and if they cared, it still wouldn’t be valid, it would be seen as a sort of outlier. I know at the moment, I’ve got lots of girl studies colleagues, and they talk about how even now, a girl’s diary is not seen as a factual source. It’s still seen as fantasy a lot of the time.

We need to be reading more of these sources. We need to understand more about what people’s lives were like.  But there is also this idea of ‘fact’. And I’m a big believer in facts. But we do have to talk about how five eyewitnesses see five different things, and that everybody is an individual. I think that is the hardest leap for academics, for historians. We want to group people and we want to typify people. We want to make it easier to make sweeping statements that make our jobs available.

On the practical level, how to help girls like that is not best done by me. I’m not an educator by training. I can do that as a mentor, I think it’s the little things we can do. We can only really affect our small little world in that way.

I’ll give the example of my PhD project. I’m looking at girls represented in art. My question is around rape culture, and how art and art history – the art on the walls – and also how art has been talked about and discussed, catalogued, displayed and interpreted, and how both of those in conjunction have supported and perpetuated rape culture.

But we’re educated out of feeling about things through our training.

In my training as an art historian, for example, when I looked at a picture of a nude woman who was being taken advantage of in a painting, that’s what I saw. I didn’t see the brushstrokes. I didn’t see the lighting or the colours. When they taught, it was in a formalist way where you didn’t look at the content. And I feel like in many ways, we’ve gone through the invasion of theory, through all the French intellectual thinking and deconstruction and Marxism. We’ve gone through all that, but I feel like we haven’t really moved that far forward.

Right now, I’m facing this moment of – do I put a trigger warning on my work? Because in art history, you don’t put trigger warnings on a picture of a naked woman. That’s just what’s there. That’s there all the time as an object of display. As an object. But since I’m going to talk about it as part of rape culture, I have to frame it differently. What would you think if you’re meant to go to a conference and someone has on their abstract a trigger warning: ‘Images of nude underage girls and violence towards them.’? You would think, ‘How is this person getting away with doing this presentation? That can’t be right.’ But I’m not showing audiences anything that isn’t hanging on the wall in the Met and at the British Museum.

That’s the kind of change-making that I’m trying to achieve. And even though it’s a PhD, even though it’s in the theory and academic realm, the thing I want to do is quite basic and small and on the ground. Which is the creation of empathy. And I think that is the main thing we can do. Creating empathy towards girls, specifically, can change rape culture. Because if women have that empathy, women will protect them. If boys have that empathy, they won’t rape them to begin with. That’s how you change it. So, it isn’t about girls doing something better or different. It’s everybody else that needs to step up as well. Girls need to carry on and fight for each other and themselves. But it’s also, not teaching them to hate themselves, to hate their bodies, to not trust anybody. Not to teach them that they have to love the people that abused them. These are huge lessons that are taught all the time, every day, that are deeply problematic for how to make healthy girls that can change the world rather than keep it the way it is.

(FJ) I’d like to explore in this last part of our interview, some practical steps. A lot of our readers are or might become mothers and a lot of them are professional women. So, they might fall broadly into the feminist womanhood category. And I want to leave them with a little bit of practicality on what they can do to realise their goals if they are mothers, or if they are not, how to help them interact and connect better with girls in other capacities.

Where I’m coming from is a question of how to bridge what seems to be a disconnection – where at the ‘top level’ it’s a discourse of gender parity, financial parity, work parity, men and women can do all the same roles – but that’s at the level of adulthood. But what seems to still go on at the ‘ground up’ level – the level of socialisation of children – is still very gendered.

I’d really welcome practical tips on how to cultivate that empathy bridge between adults and girls, and how our audience can engage with girls in such a way that is helpful individually and culturally. In other words, how do we carry out that cultural change in practice? What does that look like?

(A) I’ll start with, yes, I do think there is a disconnection, and I think it’s getting worse. And that may be internet driven, in terms of – if you want to buy a toy online, you are still filtering through a ‘boys’ and ‘girls’ category in online stores – categories that should not exist. So we are still categorising, via the internet, because online you have to put things into sections and menus and choices like that. I also think there is a human instinct to categorise. So that reinforces things.

I also think that the sort of commodification, the Instagram life, it creates on one level – hyper girliness and on another level – hyper masculinity. But in the middle path a lot of people are getting to express themselves in ways they’ve never been able to before and that’s good.

Through Girl Museum, I’ve met so many girls from so many countries as interns, and we’ve never physically met. I’ve only met three people I’ve worked with, and I’ve had over two hundred interns and my staff consists of twelve women who I’ve yet to meet.

Girl Museum, is, on a meta level, through the girls and young women who are our interns and volunteers – we are effecting change in their lives. I’ve helped people get jobs. I’ve helped girls develop projects that have become master’s degrees and PhD projects. My staff and I have helped so many girls just feel better about who they are and have given them an opportunity to have a voice. So that for me, that’s what we do in practice too.

In terms of on-the-ground practicalities, that’s what women can do: give practical assistance to girls. For example, start a personal internship program for whatever you do.

For example, I wear another hat as an exhibition developer and a creative producer for exhibitions at museums in New Zealand, Australia, and Asia. A young woman once called the office I was working in looking for a job, and we didn’t have one going. But I told her, if you have five hours, come in and be an intern for me. She was a volunteer intern for 3 weeks, then got a paid position. And now she’s a producer – that was ten years ago.

I’m lucky that I’m an older PhD student, which means I can help young people who are in their mid to late 20s and who don’t know, necessarily, what they’re owed or what they deserve or what they should be getting. They need to stand up, and to have someone stand up with them. Not everyone is comfortable with that role. But if you can be that to one person and if you can help guide someone or help teach them tools to protect themselves, that’s something practical.

(FJ) I want to end on this question, which is for the girls in our audience, and for the women who are reflecting on their girlhoods in our audience. What is your message for them? What is one thing you want to say to them?

Get a picture of yourself, where you were at your happiest as a girl. You get the photo, and you put this photo on your desk or desktop. And every day, you look at that girl. You ask her ‘How are you going?’ And you try to answer honestly.

Having that little exercise really helped me on my journey with Girl Museum. I was asking little Ashley what she thought of adult Ashley, and asking, ‘Could I do better?’

You can have different conversations with yourself at different points in time.

When I started Girl Museum, I was angry about where I was at, I thought I should be somewhere different, doing something better and more impactful. Then, it was a much more frustrated conversation I had with my face.

And now, I can look at myself and feel much more comforted by that face, I’m inspired by little Ashley’s cheekiness – and it reminds me ‘Yep, you need to go for it. You need to stand up. You need to say something. Don’t be silent.’

My advice is to get a picture of yourself, and the image is really important, to see your younger self. And to ask yourself – what have you done for her? 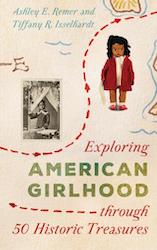